HOW IT WORKS
The science behind Sharkbanz Technology

ACTIVE SHARK DETERRENT
Sharkbanz’s patented magnetic technology is the result of long-term scientific research and testing. Sharkbanz utilize powerful permanent magnets to create an effective shark deterrent that’s always on and require no batteries or charging. When sharks approach Sharkbanz, they detect the device’s strong electromagnetic field, which provides a sudden sensation that is thousands of times stronger than the signal produced by anything in a shark’s normal food chain. Consequently, sharks are deterred away from Sharkbanz. This cause and effect is analogous to having a bright light suddenly shined in your eyes in a dark room. You would not be hurt, but you would want to turn away. 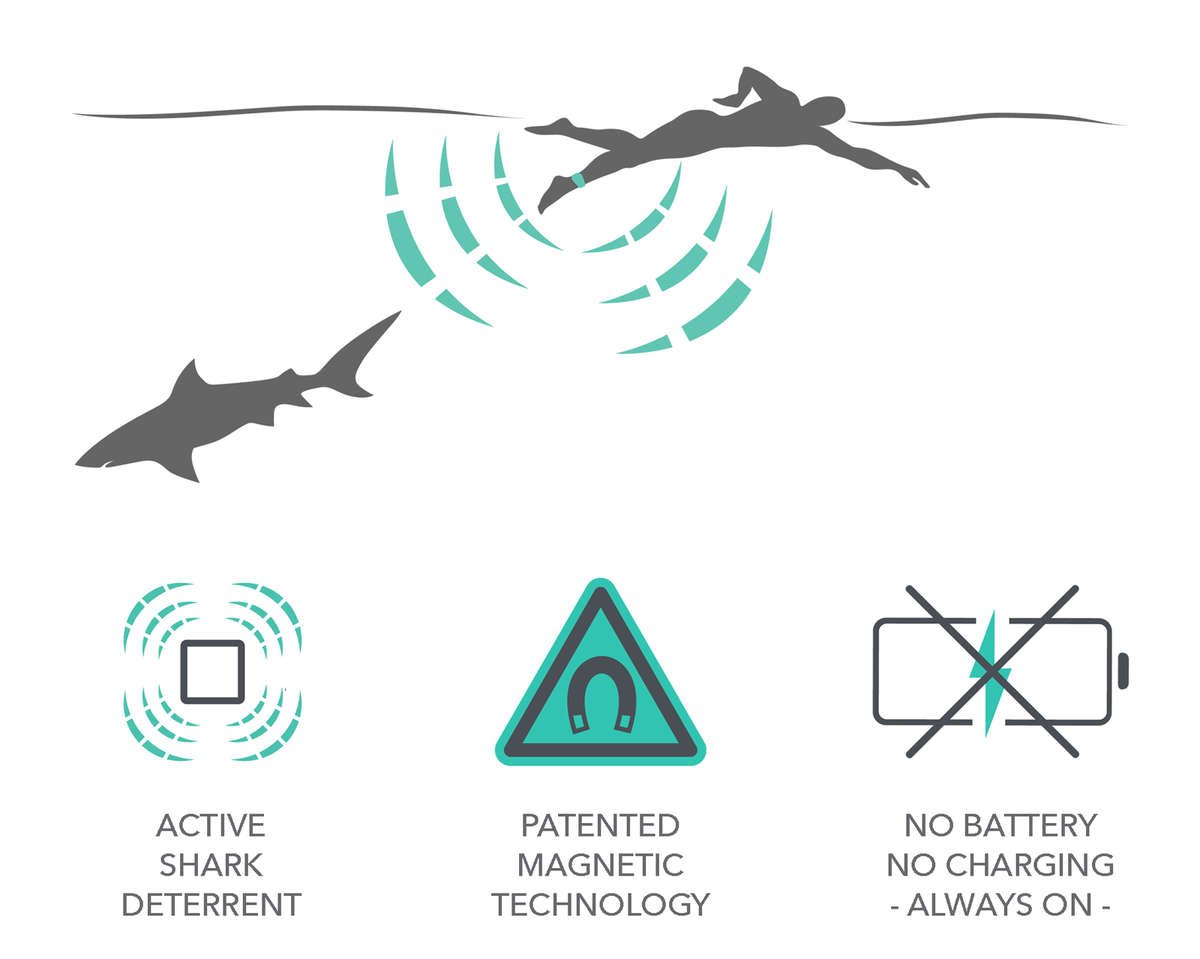 SHARKS' SIXTH SENSE
Sharks have the strongest electroreception (sensitivity to electrical fields) in the animal kingdom. They use this unique capability to navigate at night, when in murky water, and to hunt. Their electroreceptors (Ampullae of Lorenzini) and lateral line canals connect to the seawater by pores on their snouts and other zones of the head. When a fish swims, or even moves its gills, it creates a change in the surrounding geomagnetic field that sharks can detect with these electrically sensitive, gel-filled canals. Since the shark is tuned to be looking for very weak electromagnetic signals from its prey (heartbeats, muscle movements), this organ is highly sensitive. When encountered in the wild, the Sharkbanz field is exponentially greater than anything the animal will have experienced before and highly unpleasant. This tells the shark it is definitely not food. 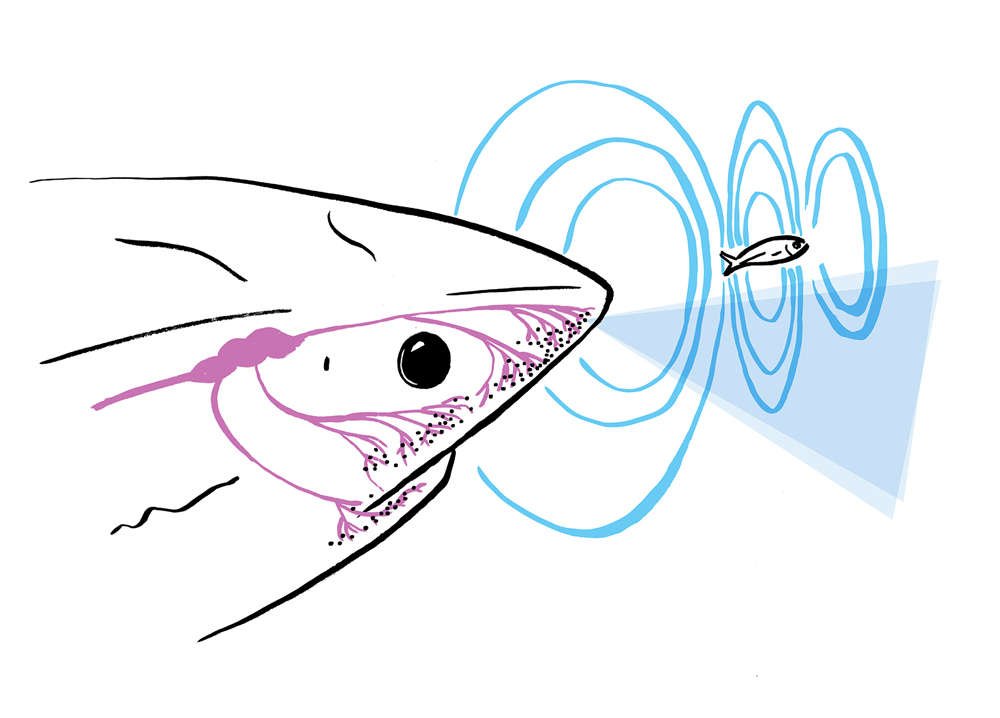 An artist's rendering of a shark's Ampullae of Lorenzini - used to detect prey's weak electrical fields generated by its muscle contractions and movements.

WHY SHARKS USE ELECTRORECEPTION
The ability of sharks and rays to detect weak electrical signals in their surroundings may be one of the greatest factors relating to their survival through the millennia. Every creature, whether a fish or friendly beach goer, generates weak electrical fields while in motion. When sharks are close to potential prey, their electrical sense plays a major role in making the final attack. Actively hunting sharks may have as many as 1500 ampullae around their snout and head, while more sedate species may only have a few hundred. 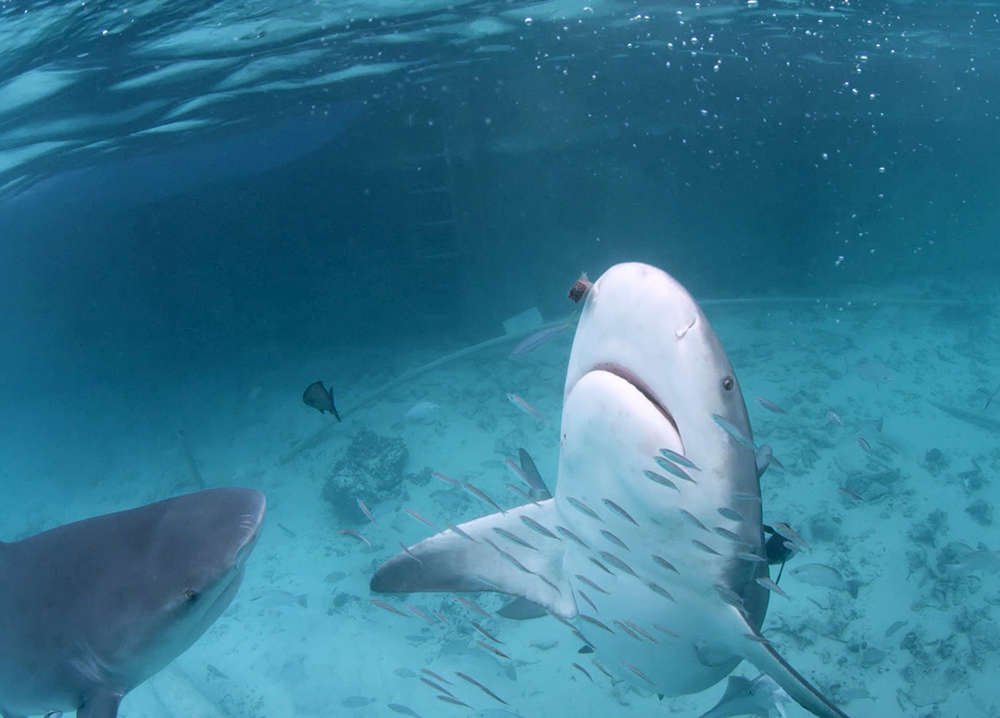 A Bull Shark uses its electroreception in sandy (murky) water to hone in on a piece of bait, ensuring its accuracy.
SHARKS ARE CURIOUS
Sharks use this sense to locate objects nearby, and it becomes vital when they cannot depend on vision alone. In the surf zone, the water is murky, and people and sharks are sharing the same space. Most shark bites occur in these hard-to-see conditions. People are not on shark's food menus, but when their electrical sense alerts them to potential prey in their area, they are likely to investigate. Remember: sharks don't have hands, so they use their mouths to feel. This is why the majority of shark bites are "hit-and-run" attacks, meaning the shark bites, then quickly leaves after it recognizes someone isn't food. Unfortunately, a simple case of mistaken identity can do a lot of damage. Sharkbanz warn curious sharks that the wearer is not food before they bite, reducing the risk of hit and run attacks. 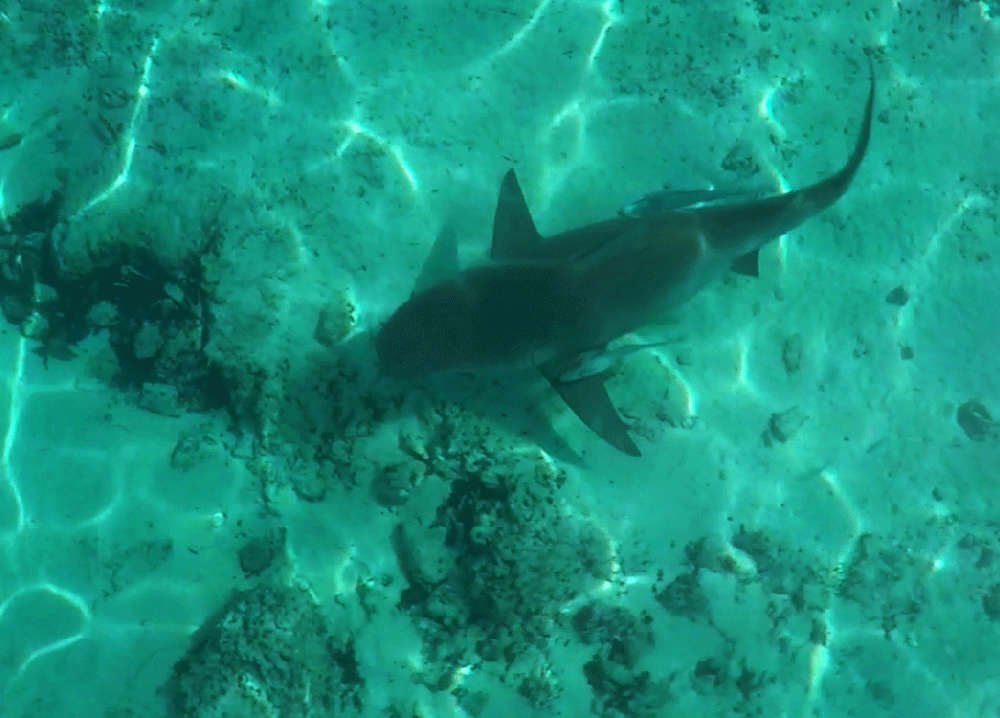 A Bull Shark cruises the ocean floor in the Bahamas.

Research & Testing
Sharkbanz are the result of more than a decade's worth of testing and research on the effectiveness of magnetic technology used to deter various Elasmobranch (shark) species.
View Research Info 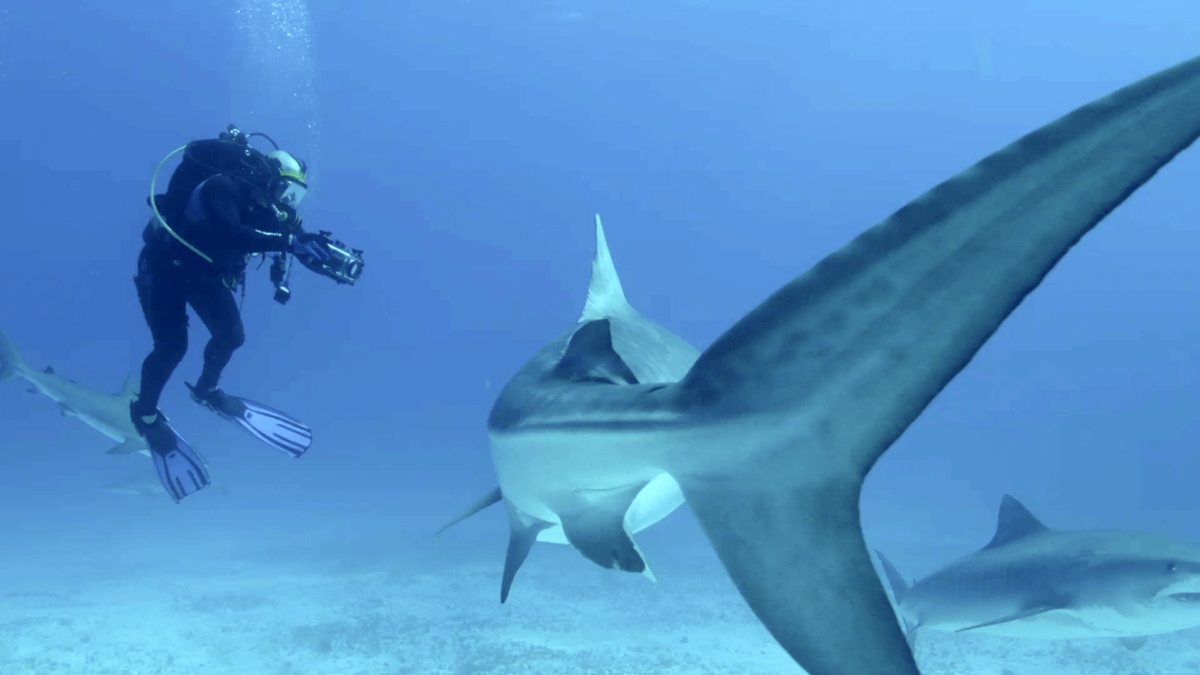 Dr. Patrick Rice (of Shark Defense Technologies) studies and films a large, adult Tiger Shark in the Bahamas.
RESULT OF THE RESEARCH
Since its scientific discovery over 10 years ago, the theory of permanent magnets functioning as shark deterrents has been extensively studied, researched and tested on a variety of shark species. Sharkbanz are the result of this R&D. Our company maintains constant contact and collaboration with the founders of this shark-repelling science, Dr. Eric Stroud and Dr. Patrick Rice of Shark Defense Technologies - the leaders in shark repellent technology.
COMMITMENT TO RESULTS
We continue to test Sharkbanz on as many predatory shark species in a variety of scenarios as possible. Successful test demonstrations have already been conducted on Bull Sharks, Hammerheads, Blacktips, Lemon Sharks, Sharpnose Sharks, and Caribbean Reef Sharks. We are scientific and results driven, and other predatory species will be tested. Furthermore, we are continuously working to promote (without influencing) further independent testing of the product by credible and reputable members of the scientific community. We're not here to offer blanket statements and/or "magic bean" products. Our goal is to improve on Sharkbanz' effectiveness through strategic R&D, which has been underway since 2013. 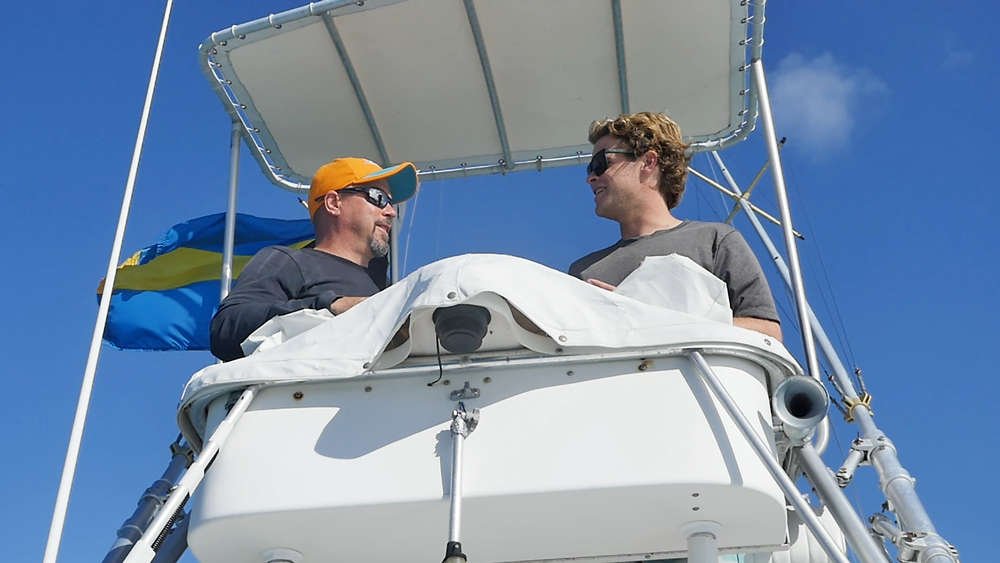 On the dates of November 15-17, 2017, The
Sharkbanz Team, in association with Discovery Canada and Sharkdefense Technologies, LLC., conducted a comparative research study with Sharkbanz products on wild bull sharks in Bimini, Bahamas. This study and its data results proves the effectiveness of Sharkbanz as an active shark deterrent on Bull Sharks.
Sharkbanz vs. Great Hammerhead
While conducting some Bull Shark testing in the Bahamas this year, we unexpectedly encountered a Great Hammerhead only a few feet from shore - a rare occurrence! He was attracted to the bait in our dummy's (Bernie) leg meant for the Bulls and came in for an evening snack. Luckily for Bernie, he was wearing his Sharkbanz and the shark reacted noticeably with a distinct avoidance reaction (twice) before swimming off to find a meal elsewhere.
Sharkbanz vs. Bull Sharks
The Bull Shark is widely considered the most dangerous shark to humans because of its aggressive nature and nearshore habitat. The magnetic technology inside Sharkbanz was first successfully tested on Bull Sharks several years ago, and this demonstration shows how effective they can be in a baited scenario.
Sharkbanz: The Bernie Test
Most shark attacks occur in murky, shallow waters off the coast where there are a high number of swimmers and sharks sharing the same space. These unprovoked “hit and run” attacks are the most common type of shark bite, and Sharkbanz are an excellent defense against them. Using our test dummy, Bernie, we wanted to put our technology to the test in a simulated surf scenario. Even with bait in Bernie's leg, there were never any bites while using Sharkbanz. Without Sharkbanz, there were multiple bites.
Sharkbanz: Shark Defense Personal Test
Our first filmed testing and open-water demonstration. Along with our scientific partners at Shark Defense, our team put on our Sharkbanz and jumped in with the sharks to show the technology truly "in-action". Although we wanted to show people just how much we believed in the effectiveness of the product, we do not recommend or encourage anyone to attempt demonstrations like this with Sharkbanz and wild sharks.
Modom Shark Leash vs. Bull Sharks
A compilation of our testing sessions with the Modom Shark Leash (featuring Sharkbanz Technology) against Bull Sharks in addition to various other shark species such as Blacktip and Caribbean Reef Sharks. Over three days testing the Modom Shark Leash on wild sharks, all with the use of bait, we never recorded a bite reaction. When the Shark Leash was removed, bites occurred within minutes.